After an incredibly successful “Book of Souls World Tour,” that ran from 2016-2017 for a total of 117 shows, Iron Maiden didn’t have any plans of going home and relaxing. Following the completion of that tour cycle, Maiden launched into the “Legacy of the Beast World Tour.” Based off their hit mobile game and comic book, the tour’s setlist brings fans through the history of Iron Maiden. This run was something that North America only dreamed of getting, as it was only in Europe for 38 shows in 2018. Lucky enough, Bruce Dickinson and the rest of the band decided to bring the legacy to the United States and Canada in 2019. 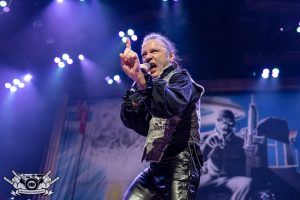 On Tuesday Aug. 13th, Maiden their massive tour rolled into downtown Buffalo. This marked the first time in 32 years that the band has played in the city. After playing amphitheaters like Darien Lake the last few times in Western New York, the boys from England finally decided to play the Key Bank Center, home of the Buffalo Sabres.

Prior to Iron Maiden taking the stage, upcoming metalcore band The Raven Age took some time to warm up the crowd. The Raven Age is no stranger to touring with Iron Maiden. The band was direct support for Maiden on the “Book of Souls World Tour” and also on select dates for the 2018 run of the “Legacy of the Beast World Tour.” The Raven Age features Iron Maiden bassist Steve Harris’s son, George Harris, on guitar. Alongside Harris, is Matt Cox on bass, Jai Patel on drums, Tony Maue on guitar and Matt James on lead vocals. In 2018, the band went through a lineup change, which brought vocalist Matt James in. Since his addition, the band has released their newest album, Conspiracy. The album seemed to go in a heavier direction vs their debut release. New material was certainly favored over the old. Raven Age’s 9 song setlist consisted of 7 songs from Conspiracy  and just 2 from Darkness Will Rise. The fast riffs and screeching leads that Harris and Maue laid down on guitar certainly sat well with the crowd who were interested in what the young band had to offer. 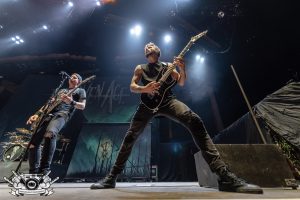 After The Raven Age wrapped up their set, the packed Key Bank Center eagerly awaited “Doctor Doctor,” the UFO song that everyone knows marks the real beginning of an Iron Maiden show.  Fans along the front row draped their custom banners to signify their stops on the current tour, with some seeing shows not only here in the United States but Canada and Europe. Behind the front row of Maiden die-hards was a sea of both new and old fans who threw their metal horns into the air. When the house lights dimmed and the arena grew quiet, the band rushed the stage from both corners, kicking things off with “Aces High.” As the song set in, vocalist Bruce Dickinson made his entrance by running right up to the edge of the stage where he was greeted with a thunderous roar. While guitarists Dave Murray, Adrian Smith and Janice Gers were all interacting with the crowd along with bassist Steve Harris, Bruce controlled the middle of the stage with a giant plane floating overhead, fully decked out with a full moving propeller this massive prop was only the beginning.

As the show progressed, Iron Maiden brought out all the bells and whistles. Each song that the band played featured a backdrop change and an outfit change for Bruce. The crowds first look at Eddie came during “The Trooper.” Bruce and Eddie did their classic sword fight across the stage while the band galloped through the main riff. While Eddie wasn’t out on stage all show, Iron Maiden had plenty more to give Buffalo. During “Sign of the Cross,” Bruce sang center stage wearing a black hooded robe, behind a giant cross mounted in the dead center. Towards the end of this epic track, the cross lit up while Bruce ran round stage with it. As the song ended with Bruce on the back platform, the stage went dark and Icarus appeared, suspended from the top of the stage. This is when the flame-throwers were brought out, one attached to each of Bruce’s arms. This was certainly a highlight from the show that will never be forgotten. The entire duration of the song featured Dickinson trading bursts of fire from arm to arm. 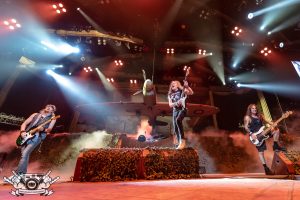 The 2nd half of the set featured other tracks like “Fear of the Dark,” and “The Number of the Beast,” both fan favorites. The arena reached its melting point during “Number of the Beast,” as constant pyro blasts from every corner of the stage reached the ceiling. There wasn’t a corner of the building that couldn’t feel the heat. Things came to a wrap with a 3 song encore that left everyone wanting more. The first two of the encore, “The Evil That Men Do” and the epic “Hallowed Be Thy Name” built up to the finale.

Maiden said their goodbyes with their classic “Run to the Hills,” off the album The Number of the Beast. By this point in the show, no one was sitting down in the arena and everyone was yelling at the top of their lungs. While the song came to an end, Bruce was “escaping” explosions on the catwalk and making his way to a TNT box in the middle behind drummer Nicko McBrain. As the final note played, Bruce hit the TNT lever, setting off an explosion of fireworks across the entire stage, ending one of the greatest metal shows in Buffalo history. 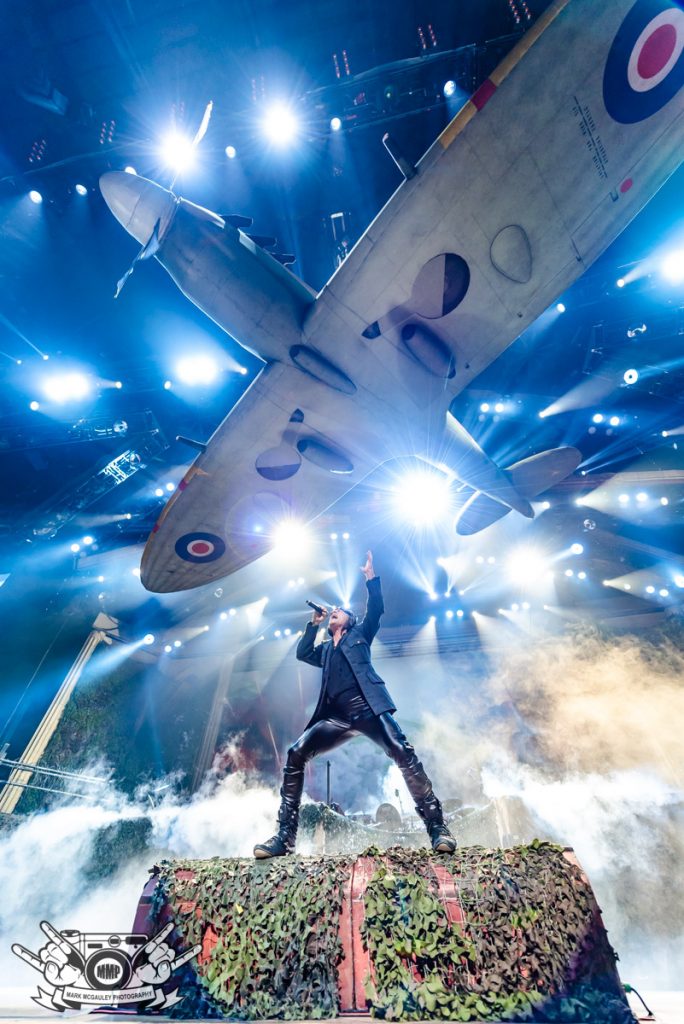 Watching as fans spilled out of the Key Bank Center, each and every one of them repping a new or old Iron Maiden shirt of some sort, it was obvious that no one would be forgetting the show they saw that night. Many who attended that evening will more than likely be catching at least another handful of shows or so on this tour. If there’s one band that has the most loyal, die-hard fans, it’s Iron Maiden.

The band will be continuing their massive tour throughout the US, where they wrap up in San Antonio, TX on September 25th. From there, the tour heads to Mexico City and South America. The Legacy of the Beast Tour is set to wrap up in Santiago, Chile with back to back nights on Oct. 14th and 15th. Even though there are no more dates scheduled for Iron Maiden past October, there’s no doubt they will be back at it again for another 1 or 2 trips around the world.